What is London Broil?

Now, what is actually on sale is Boneless Top Round Steak or Roast at almost $2.00 off its usual price. This flavorful steak is a great bargain. Grocery stores many times will label a flank or top round steak London Broil.

The best way to make round steak into London Broil, is allow the meat to marinate for several hours or overnight. You then broil or grill the beef at high heat. Then you thinly slice the meat on the diagonal and serve.

We make this tasty marinated round steak recipe quite often. London Broil is perfect for grilling.

If you can’t grill the London Broil, you can broil it, but you’ll miss out on the outdoor grill flavor and grill marks.

The Dijon mustard marinade makes this lean and less tender cut of meat into a delicious protein with touches of mustard,  pepper, ginger, and garlic. If you like, you can also add fresh rosemary or Italian seasoning to the marinade instead of the ginger.

You can get the flavor and tenderness without having to pay the high price of Filet Mignon or  Rib Steak.

Meat, especially beef, is more expensive now than a few years ago. So whenever we find any meat on sale, such as the top round cut, we stock up.

How the London Broil marinade helps flavor and tenderize

Top Round Marinating for London Broil

When our kids were home, we had a big freezer in our basement. Next to the freezer was a huge school size chalkboard that kept track of our frozen inventory.

This was my Honey’s doing; he knew at all times what was in the freezer.

Now I have to confess; I’m not that organized. If my Hubby were reading this now, he’d probably be laughing his head off and saying that I’m not organized at all.

His method gave our kids a big chuckle. They called it one of his “isms,” because whenever he took anything out of the freezer, he marked it off the chalkboard.

I just have my way of doing things. Besides artistic minds can’t always think of the mundane, especially when they’re filled with creative ideas, just waiting to be conceived. 😉

Now that we have a smaller house and smaller freezer, we don’t stock up quite as much as we did. But, when there’s a sale on food, we do take advantage of the sales.

Just ask my Honey what’s in the freezer. He’ll give you a complete rundown, and know exactly where it is plus have it organized with the oldest package on top.

Cut London broil on the diagonal with a sharp knife.

Even though it’s just the two of us, we still purchase the more economical cuts of meat. When prepared correctly, a tough cut of meat such as a top round roast will have lots of flavor and be tender.

This beef cut will need marinating. But also it must be cooked hot and fast on the grill, with no more than medium doneness.

My Grill Master, that’s Honey, will time the meat,  just like he does for the Pork Chops so that the London Broil gets those beautiful grill marks.

Overcooking the top round steak will make it tough no matter how long it’s marinated, so it’s a good thing that our family likes their meat on the medium rare side.

For a juicy London Broil, the internal temperature must not pass 130 F on a meat thermometer, and then it has to rest about 10 minutes for thicker cuts.

Why do I need to let the meat rest?

The steak rest allows the London Broil to relax and the juices to redistribute throughout the meat.

When it’s time to eat, Honey carves the  London Broil cross grain, and then we dine on an outstanding meal with a less expensive cut of meat.

Here are more meat recipes you may enjoy

We know you’ll love these easy meat recipes. They are delicious!

The following are affiliate links. We are a participant in the Amazon Services LLC Associates Program, an affiliate advertising program designed to provide a means for us to earn fees by linking to Amazon.com and affiliated sites.

Thanks so much for being a part of All Our Way!

This is similar to the classic knife we use all the time. It’s important to have a great knife because the sharper the knife the less likely you are to cut yourself. I know, you’d think it would be the opposite but it isn’t. Take care of your knives and they’ll last a lifetime!

London Broil is a method of cooking either a flank or top round steak. The marinade infuses the meat with lots of taste and the acid in the marinade helps to tenderize the beef so that it will be juicy and tender. A good marinade makes all the difference. This easy recipe is one of the best steak recipes there is. 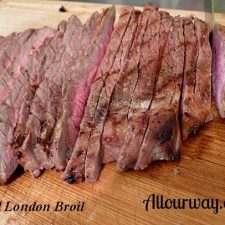 If you want more of an herb taste, instead of ginger use chopped fresh rosemary or dry Italian seasoning.