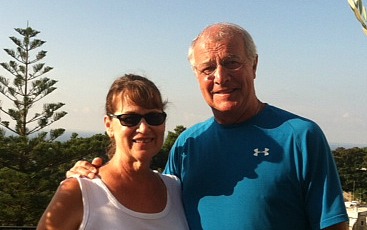 Once upon a time there was an Italian girl who attended college near a small mid-western town. Graduation was fast approaching and she was excited.

She was going to get a job in a large city and she would travel.

At that same time a young man, newly released from his tour of duty with the Air Force, returned home to that same mid-western town.

He was going to get a job and enjoy his freedom.

But Fate had other plans.

Fate made sure that their paths intersected . . . several times.

All did not go as smoothly as fate would have planned.

He thought she was a beautiful snob.

She thought he was a handsome jerk.

He thought it would be best if he just ignored her.

She thought it would be best if he did not.

That's when the fireworks began. . .

It's been forty six years since they met. Forty four of those years they've been married. Together they raised three outstanding children, who in turn have blessed them with four fantastic grandsons. They are empty nesters who have moved from their large country home to a small ranch style house in town.

Life has been kind to them. They now have the opportunity to do everything together.

And together they do everything. . .