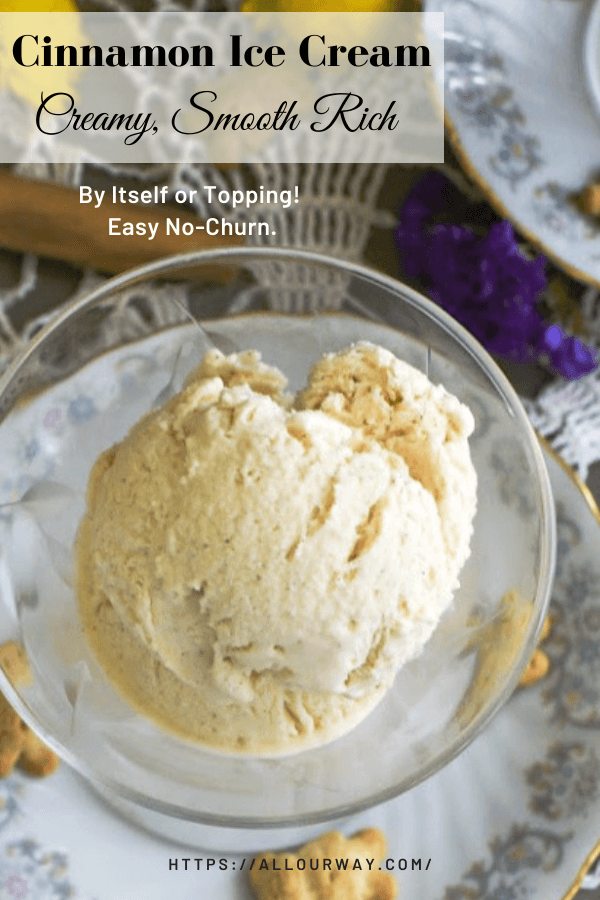 One taste of this velvety smooth Cinnamon Ice Cream and I’m dreaming about all the ways I’m going to serve it. Brown speckled scoops slowly melting on fragrant warm apple pies and cobblers during fall and winter. And in the summertime, waffle cones filled to overflowing with a cool, creamy tower of frozen delight. This no-churn fragrant treat is a recipe for all seasons. We can’t wait to try it with our Slow Cooker Polenta Cake With Caramelized Pears.

We had some extra heavy whipping cream in the fridge and we were debating on what we could do with it.

Well, whenever we have several extra cups of heavy cream the first thing that comes to mind is homemade no-churn ice cream.

The second thing that comes to mind, what can we make ahead of time for the Thanksgiving holidays.

Now, you have to try to follow our train of thought. heavy cream>holidays>dessert topping>cinnamon ice cream.

We didn’t lose you, did we? We could make a whipped cream topping ahead of time and what spice screams fall desserts? You got it! Cinnamon.

Cinnamon Ice Cream it’s all about the spice

I knew there were different types of cinnamon but I didn’t realize that the flavors went from subtle and sweet to bold and spicy.

We had our kids and grandkids do a quality control test and this is what they said it tastes like:

So, if you’re as pazzo {crazy} about this fragrant spice as we are, you’ll be wild about homemade Cinnamon Ice Cream.

What are the different types of cinnamon?

Which cinnamon is better for you?

The cinnamon that is low coumarin is the best. Coumarin is a substance that can cause liver damage or complete failure. Ceylon cinnamon has the lowest level of this substance while the rest are high.

If you’re taking cinnamon for your health Ceylon is your best bet.  Read more about the health benefits of Cinnamon here.

No. They are from two different genus.

What type is Mexican Cinnamon?

It belongs to the Ceylon genus. If your Mexican recipe calls for cinnamon, this is the one to add. It is mild and sweet creating sophisticated layers of flavor.

Vanilla Extract – adds another layer of flavor to the treat.

Cinnamon Twist Flavored Vodka – this gives the dessert flavor and helps prevent it from getting icy and freezing too hard.

If you don’t want to use the vodka, you don’t have to but your ice cream will freeze harder. Just take it out a about 10 – 15 minutes before scooping out a serving.

Just think of all the ways you can use this delicious homemade ice cream. By itself it can be THE  dessert or as a topping on pies and cakes.

Cinnamon ice cream should be in every freezer waiting for it’s spectacular moment. We know you’re going to love this no-churn ice cream as much as we do.

Cappuccino Gelato No-Churn Ice Cream – this is for the coffee lover, deliciously rich and smooth.

Caramel Apple Pie Ice Cream – for those who can’t go through the holidays without their apple pie.

As An Amazon Associate I earn from qualifying purchases.

We love these ice cream containers. We make lots of ice cream and it stay creamy and rich for quite some time. We do add some plastic wrap right against the frozen cream before putting on the lid. Less air that gets to the dessert the better.

What’s new? check out my All Our Way Store on Amazon. We’ll be adding more items we love and use or wish we had to make cooking fun and easy.

This is such an easy dessert to make and have on hand. It truly is the recipe for all seasons. In the summer serve it in a cone or between two of your family’s favorite cookies for an ice cream sandwich. In the colder months serve it on top of your favorite fruit desserts. And the beauty of homemade no-churn ice cream is that you don’t have to cart around a heavy ice cream maker. It’s a win-win all the way around.

If you like this recipe please give it a 5-star rating. 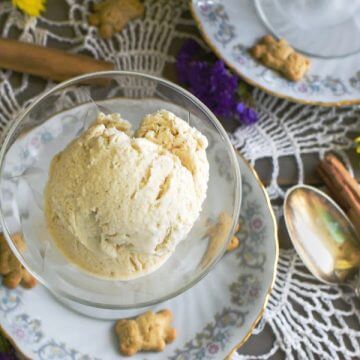 A rich and creamy dessert that needs just a few ingredients plus no special equipment. Heavy cream and sweetened condensed milk is the base of the dessert while the spicy cinnamon, vanilla, and flavored vodka give it the flavor. A real special treat for the family.
5 from 13 votes
Print Pin Rate
Course: Dessert
Cuisine: American
Prep Time: 30 minutes
6 hours
Total Time: 6 hours 30 minutes
Servings: 12 people30
Calories: 188kcal
Author: Marisa Franca Stewart
As An Amazon Associate I earn from qualifying purchases.

We’ll never share your email or send you spam. Promise

Note: Recipes and content from @2014-2020 All Our Way are copyright protected. Please do not use content or recipe without prior written permission. If you want to share the information, please link to this post. Grazie.