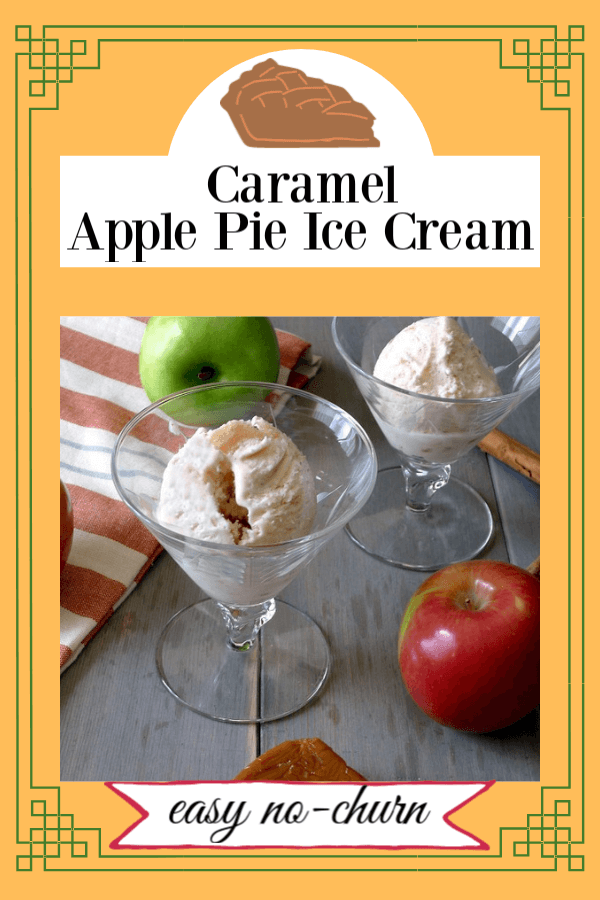 It all started with a what if . . . and ended with Caramel Apple Pie No-Churn Ice Cream. It was during the holidays and I wanted to make something special. My inner voice was telling me to do something with caramel and apple pie type flavoring . . . but without the crust. What popped into my mind was taking caramel, apples, apple pie spice and blending it all together into a creamy luscious dessert. And then, that little voice said,  what if instead of making a filling from scratch you just bought a can of apple pie filling and used that?! Hey, I really liked that voice it was making things easier for me 🙂

I was so excited about the whole concept. I couldn't wait to go to the grocery store and see what they had. Well,  the whole idea must have been karma, kismet, destiny, whatever because on the grocery shelf, in the baking aisle , in front of me was Caramel Apple Pie Filling.

I did a little happy dance right there in the middle of the Kroger aisle.

Next stop was the liquor store to purchase some kind of liqueur that would compliment the caramel apple pie flavoring.

The only apple flavored liquor I knew of was Calvados, its a brandy and we have some at home. That stuff is HORRIBLE and no way was I going to ruin a delicious creamy no-churn ice cream with what I considered rot gut.

So, I asked the proprietor if he had any small bottles of apple liqueur. He didn't but he did have tiny bottles of whipped cream vodka. Well, I thought that should work. I had used vanilla vodka for our No-Churn Strawberry Ice Cream and it tasted delicious.

Home I went with my two little bottles of whipped cream vodka and my caramel apple pie filling.

First thing I did once I got home was stick the beaters and bowl into the freezer to get nice and chilled.

I opened the can of caramel apple pie filling and dumped it into another bowl. I took a knife and cut the pieces of apples into chunks rather than slices.

Next I added the can of sweetened condensed milk to the caramel apple pie filling and mixed.

Then came the two little bottles of whipped cream vodka -- about ¼ cup and mixed. I whisked in about 1 teaspoon of apple pie spice and put the bowl into the refrigerator to get the mixture good and cold.

About 30 minutes later I poured the heavy whipping cream into the bowl that had previously been in the freezer.

I whipped the cream until it was nice and firm, but I was careful, so I didn't want to over beat and end up with butter. Once the cream was at that perfect stage, I gently folded it into the cold apple mixture.

Okay . . . now was the time for one of the most important steps -- the quality control taste. Honey and I each grabbed a spoon , dipped them into the Caramel Apple Pie No-churn Ice Cream and took a taste.

Our eyes opened wide in wonder and I swear we heard the choir on high singing praises to that wonderful creamy dessert. We thought if it tasted this good now, wonder of wonders, what would it be like after the flavors melded?

Our one grandson said it tasted like Christmas. You can't get better than that!!

If you can't get enough of apples and the season, then try our American Apple Pie recipe. It's the perfect Fall dessert and so good with a scoop of Caramel apple pie ice cream. 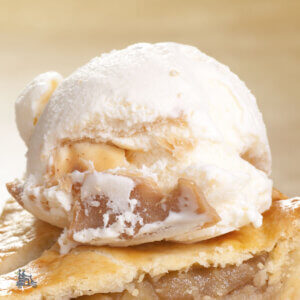 Note: Recipes and content from ©All Our Way is copyright protected. Please do not use content or recipe without prior written permission. If you want to share the information please link to this post. Grazie.