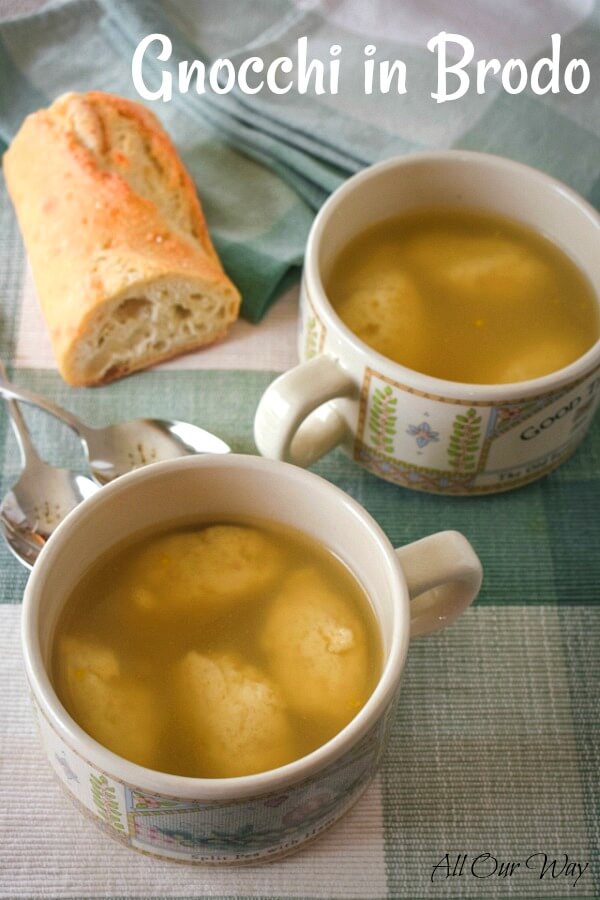 Gnocchi in Brodo is a delicious recipe that my mamma always made for special occasions. The gnocchi are so light they float in the rich homemade broth. The farina dumplings are rich in parmesan cheese, eggs, and farina (cream of wheat).

Italian broth is very light,  somewhat thin compared to stock which is heavier and more concentrated. The broth that we make is somewhere in-between. A stock is usually a means to an end, just one ingredient in the building of a complex sauce.

A broth, on the other hand, can be an end in itself. A lot of pasta is served simply in brodo. Or the brodo can be a major component in a dish, such as the Gnocchi in Brodo.

Use broth instead of water

We rarely use plain water when making farro, quinoa, rice, or couscous. Instead, we use broth. Whenever we make soup, we use homemade stock or broth as the liquid instead of water. This way you've got a head start in the flavor department.

For our homemade broth, we use assorted pieces of meat and bones in addition to some flavoring vegetables and herbs {odori}. We never use pork or lamb in our broth; it would give the broth too strong a flavor.

The water amount will depend on how much meat and bones we have for the broth. The vegetables and herbs, then, will also vary. We have come across a technique that enhances the flavor of the broth -- you first roast the meat, bones and the vegetables to extract as much flavor as possible.

The secret to an excellent broth

When we made this recipe, we already had our broth in the freezer so in this post we'll give you the recipe, but we'll post a picture tutorial at a later date when we make the broth again. We made this broth was with a turkey carcass. We follow the same method my mamma used when she roasted a turkey. She deboned the meaty pieces and then used the bones and bony parts to make the brodo. We will give you the recipe for All Our Way of roasting turkey in a later post.

Gnocchi in Brodo - putting it together

You will use about 2 quarts of broth for the Gnocchi in Brodo. Now I know that the dedicated chefs will cringe when I use the Kraft Parmesan cheese for this recipe, but when we first came to this country, my mamma didn't have Parmigiano Reggiano to fall back on. I'm using her recipe, so this is what I use.

The recipe is easy although it may seem that there are a lot of steps. It's made mostly by feel. You mix the same ratio of parmesan to the cream of wheat - do not use the instant Cream of Wheat. You beat the eggs separately.

Depending on the size of the eggs you may not need all of the dry ingredients -- you can save them to use at a later date.

The finished dough is moist and light. Mixing too long will give you chewy gnocchi. It's important to keep the brodo at a simmer.

Scoop up a small amount of dough, dip the spoon into the broth,  and let the dumpling slide off. The gnocchi will sink to the bottom, but as they cook they'll float to the top.

Let the gnocchi cook for about 15 minutes. Your cooking time will depend on the size of the gnocchi. Don't make them enormous thinking you'll save time at the stove you'll only make them tough. ????

IF YOU'D LIKE TO SEE ME MAKING THE VIDEO THE LINK IS BELOW:

The Gnocchi in Brodo are delicious. It brings back many happy memories of my mamma making this for a primo {first course} on Sunday.

Another light as air soup that is magical in its healing power is Stracciatella an Italian egg drop soup that will cure whatever ails you.

We hope you try both. They are quick to make and very satisfying.

This recipe makes a homemade broth that is light in flavor but rich in taste. Egg, cream of wheat, and parmesan cheese combine to make a light as a feather cheese dumpling. 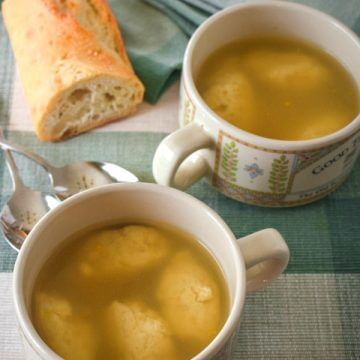 Do not use lamb or pork in the broth -- it will have too strong of a flavor.

Note: We welcome and encourage sharing links to All Our Way ©2014, but please do not copy or paste recipes or content to any media or websites without written consent. Unauthorized use of content and photos is a violation of the copyright law.