The scent of the bread perfumes the air with a wonderful aroma. . .it teases the senses long before you can finally sink your teeth into a generous slice. Comfort food is like tradition. . .it is something you carry forward and hand down generation to generation. In Italian culture food and eating is as much a celebration and  rite as Baptism, First Holy Communion, Marriage, and the Last Rites and Funeral. It is about life. . . 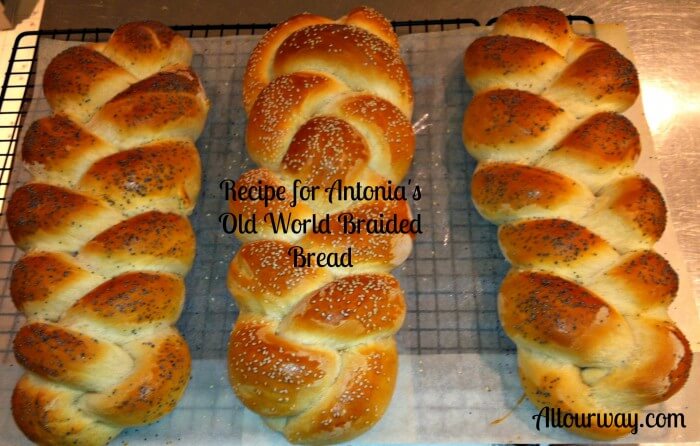 While growing up our kids loved coming home to freshly baked bread just as I did. It wasn’t just the taste of the bread that brought them comfort, it was the cozy, homey, scent of it as well. 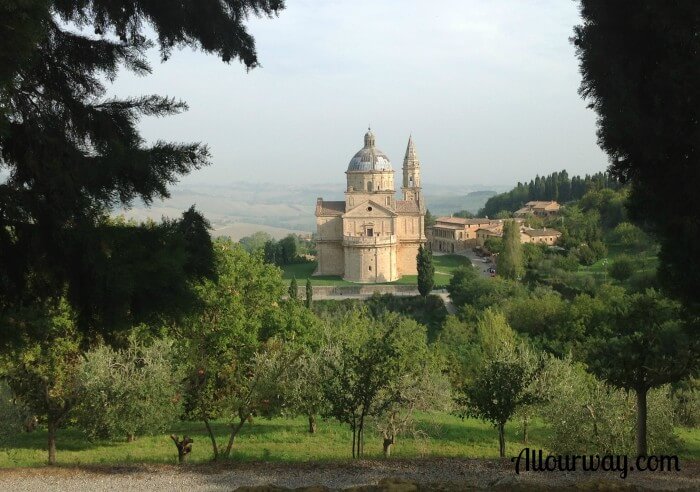 View from our cottage garden of San Biagio in Montepulciano, Italy

I remember one Sunday I had made three loaves of braided bread topped with poppy seed. The bread sat cooling on the wire racks and we had 45 minutes before we could pick up our six year old daughter at church. She was there with the first grade class practicing for their First Holy Communion. The class included the first graders from the Catholic school and those who attended public school who took CCD. We needed a few items for Sunday dinner so we decided to run to the store first. We knew we had enough time because  Kroger was only five minutes away. We completed our errand in record time and was at the church 15 minutes early.

She was not allowed to cross streets on her own and to get to our house she had to cross three of the busiest streets in town. We rushed home. . .

We had to figure out some kind of plan . . .  the plan ended up that my hubby would go to the sister’s residence, try to find our little girl’s  teacher,  while I would stay home in case she showed up at our house. It wasn’t long before my hubby returned without our little princess. I could tell he was very upset and I soon found out why. The nun had dismissed the class early. She said that she had made the announcement on Friday afternoon before school let out. That was all well and good my husband said but the children who went to the public school did not get the notice. Well, said the nun, it wasn’t her fault. No apology! No concern for the welfare of our daughter!  No regard for her safety! It is here that I have to say that she did not approve of the students who attended the public school. . . the sister believed that they should be attending and supporting the Catholic school. Her attitude toward the students that didn’t go to the Catholic school was not very Christian — and that’s putting it mildly.

The nun’s haughty reply and  attitude is what made a  usually calm daddy turn into a man who combined words and phrases that the sister had never heard before. In his outrage he could see her face pale and her fingers start running over her rosary beads. He told her he couldn’t believe that a person of God whose life work was teaching children could be so callous!  As he was telling me what transpired  the telephone rang . . .it was my mother-in-law who lived three blocks away. She asked, “Are you missing a little girl?”

We rushed over there as fast as we could. The minute we entered the house we were all hugging and laughing relieved that our princess was all right. We returned to our house and once we were in the kitchen I noticed one of the loaves of bread . . . a chunk was missing and it appeared to have been sawed off. 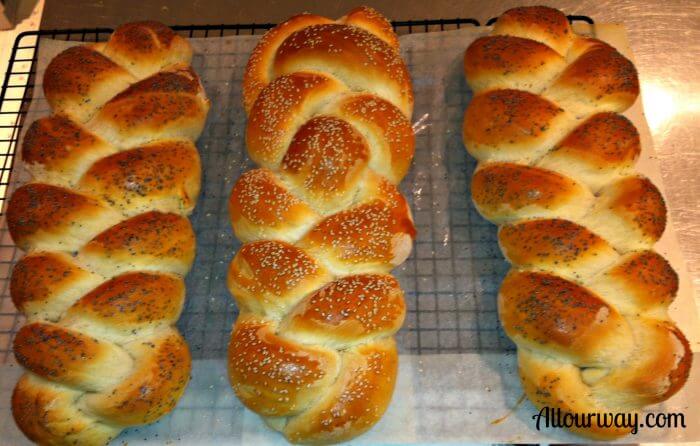 Our darling daughter explained that even though she was upset, afraid  and crying once she got home, she was hungry.  Grandma Antonia always made her feel better with her homemade bread so . . .she fixed herself a peanut butter and jelly sandwich. Oh!. . .she did further explain that she used a butter knife because she was not allowed to use sharp one and that she scraped the poppy seeds off of her bread because she didn’t like them. She told us that while she ate her sandwich she thought . . . and thought . . .

. . .so she decided to walk to grandma’s house.

She knew that grandma would help her find us. That’s our daughter. . . always a planner and a doer.   Bread not only comforted her but it also helped her to think and take action. 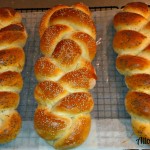 A very light white bread that is braided and topped with sesame seeds or poppy seeds. My momma didn't do quantities so I had to watch her do this several times. This is a bread recipe that she brought from Italy.
5 from 2 votes
Print Pin Rate
Course: bread
Cuisine: Italian
Keyword: easy bread, yeast bread
Prep Time: 55 minutes
Cook Time: 25 minutes
10 minutes
Total Time: 1 hour 20 minutes
Servings: 24
Calories: 213kcal
Author: Marisa Franca at All Our Way
As An Amazon Associate I earn from qualifying purchases. 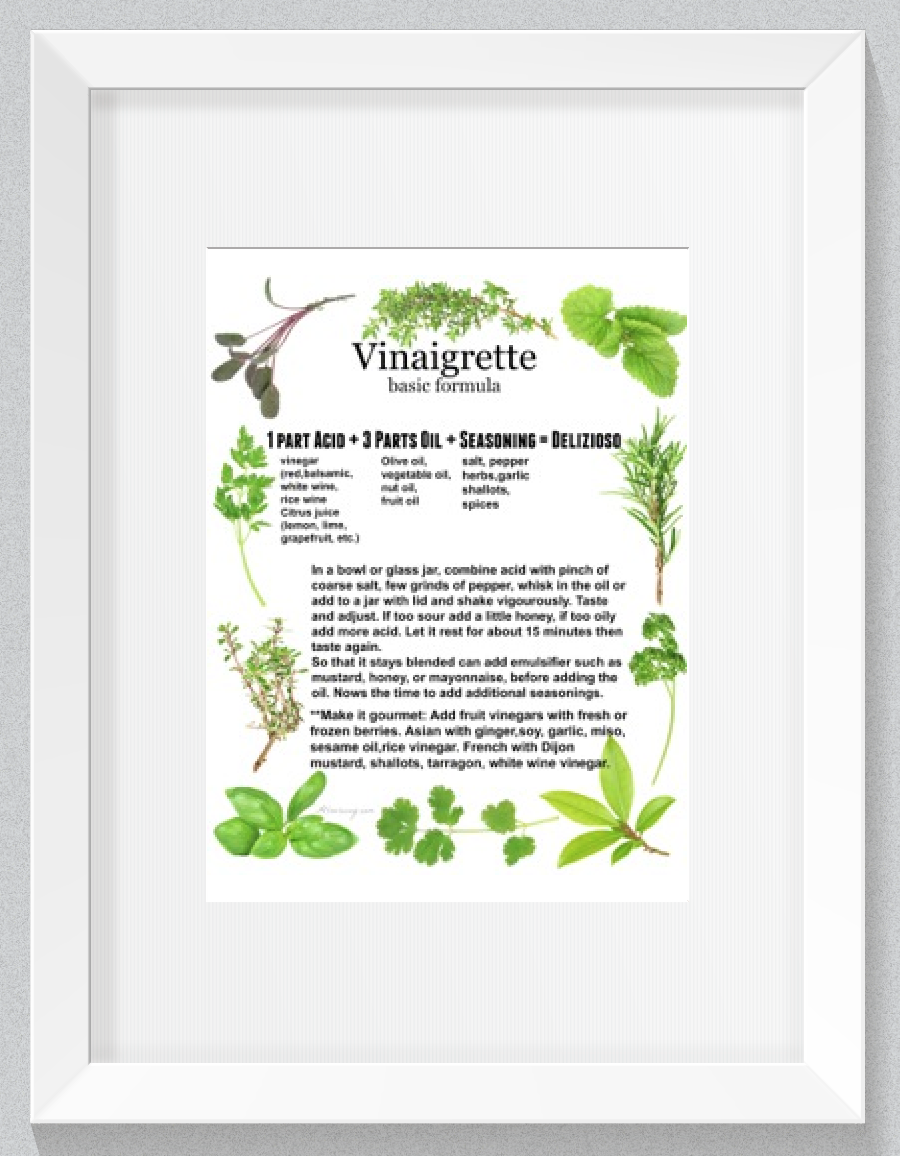