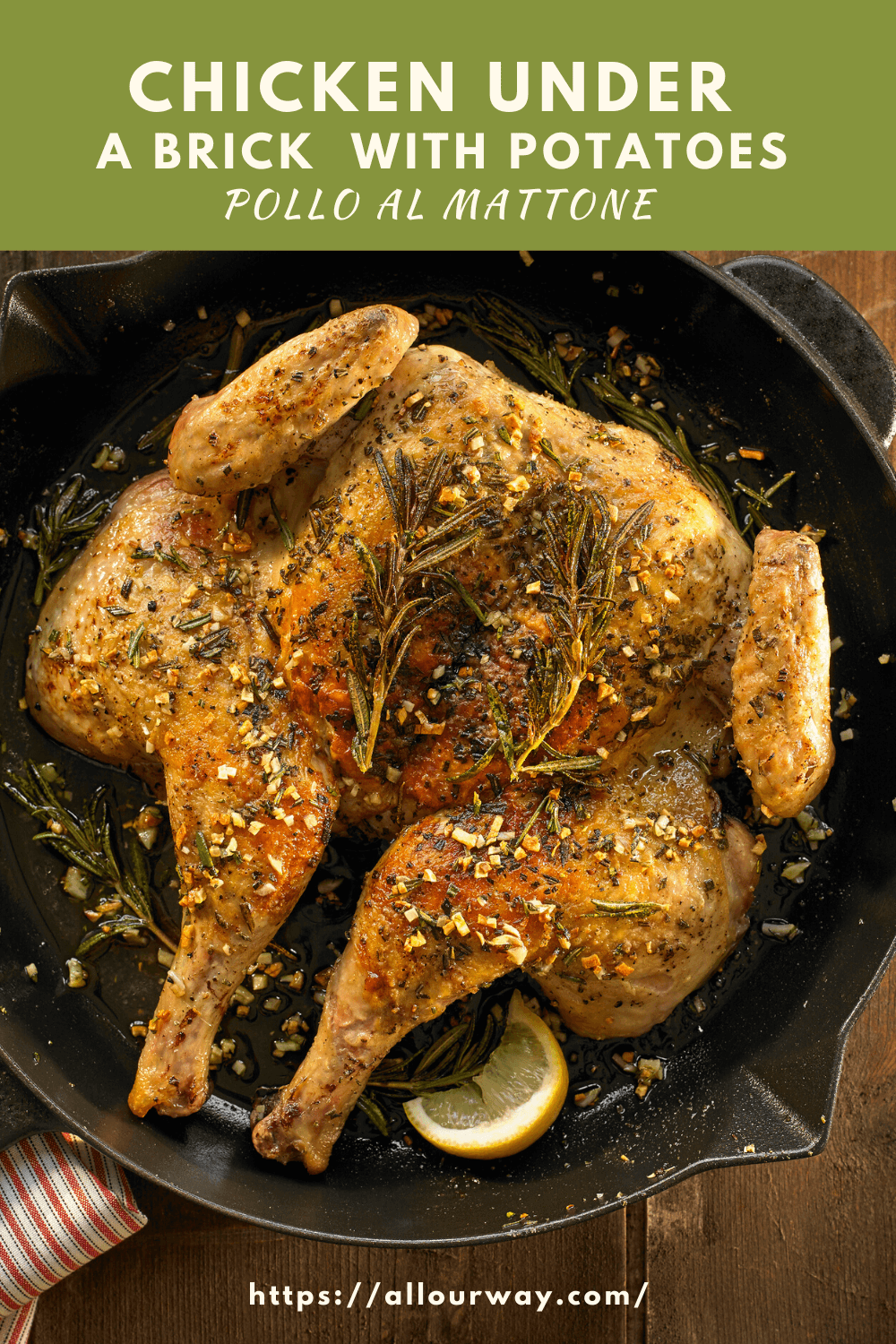 The minute we saw this recipe for making Pollo al Mattone - Chicken Under A Brick, we knew we had to try it out. What's different about this recipe is that it uses a large iron skillet instead of a brick. The method does double duty as it grills the chicken on the grill and the potatoes in the hot iron skillet.

This method of cooking chicken is really old -- as in ancient. There are pictures in Etruscan frescoes of chicken on what looks like grills and the birds are being weighed down by stones to flatten them.

The Etruscan era ended around 500 B.C. but, hey,  if a cooking method like pollo al mattone works well,  why change it?

Why use the method

We've been butterflying {spatchcocking} chicken for a long time, if you need a refresher course on how to do it,  you can find it here.

We always found that grilling a butterflied chicken, made the meat cook evenly and fast.

How to do it

This is really a very easy method to prepare the chicken -- don't be intimidated, it is very easy to do.

First we prepare the grill is for indirect heat-- that is with the charcoal on one side. If you need to see how we do it you can find the entire instructions here, when we made pulled pork.

We use this technique many times when grilling meats such as pork and chicken.

The seasoning is very simple --we use sprigs of thyme, rosemary, sage and tarragon from our garden, and a little bit of kosher salt, freshly ground black pepper, olive oil and lemons.

Then we add olive oil to coat the bottom of the skillet and toss in the russet potatoes that we cut in 1 ½" chunks and we season them with salt and pepper.

We move the skillet to the cool portion of the grill and place the chicken skin side down on the grill. The sprigs of herbs are on the inside cavity of the chicken.

The cast iron skillet with the potatoes goes on the chicken to flatten it for about 10 to 15 minutes with the grill covered.

Chicken is Moved to the Unlit Portion of the Grill

Next we remove the skillet and transfer the chicken to the unlit portion of the grill.

We again place the cast iron skillet over the chicken.

We cover the grill and cook for around 45 minutes or until a meat thermometer inserted in the thickest part reads 165°F.

We remove the chicken from the grill and let it stand 5 minutes. ( For crisper skin, place chicken on lit side of grill, and grill without lid for about 5 minutes or until the skin reaches your crispy preference).

Pollo al Mattone is Resting Before It is Cut

When the chicken is resting, we place the halved lemons cut side down, on lit side of grill, and grill, covered with lid, about 5 minutes or until charred and softened. We serve them with the pollo al mattone and potatoes.

Our Menu For The Evening: Pollo al Mattone with Roasted Potatoes and Green Beans Almondine

The meat turned out as promised -- by grilling the meat first over the heat and flattening it . . . then cooking it for the remainder of the time over indirect heat, the meat cooked evenly and didn't dry out.

As An Amazon Associate I earn from qualifying purchases.

We love our heavy duty cast 12- inch iron skillet. It is a workhorse and it gives us such great results. Here it did heavy duty as a brick and as a skillet for the potatoes.

What's new? check out my All Our Way Store on Amazon. We'll be adding more items we love and use or wish we had to make cooking fun and easy.

Chicken under a brick recipe 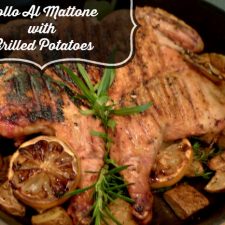 Note: Recipes and content from © 2014-2020 All Our Way are copyright protected.  Please do not use content or recipe without prior written permission. If you want to share the information, please link to this post. Grazie.